Fun in the Sun...Or is it? Summer vs. Winter 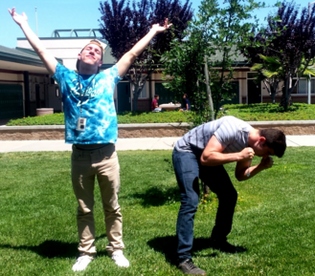 Senior Koven Kahl basks in the sunlight, while senior Ben Moran hides from it. (Photo Credit: Kendal Bricky)
Now that the end of the year is finally here and summer is just around the corner, students are rejoicing in the fact that they don’t have to wake up every morning to drag themselves to the beloved Buhach Colony High School. Seniors are graduating, freshman are no longer at the bottom of the food chain, and teachers finally are able to stay away from the angsty teenagers that fill their classrooms. It sounds like a dream come true, for most. Summertime is supposed to be a time of fun, of relaxation, but for some, it’s a time of distress. Many people believe summer is the all-time best season of the year, because it’s nice and hot, and you get to relax. Others believe that winter is the best time of the year, because it’s peaceful and cool, and it doesn’t tire you out so much. Students were asked which season was the best, and why, and the responses spoke for themselves.

Summer-lovers love the season for many reasons, including having days off and being able to enjoy themselves. When senior Koven Kahl was asked which season he preferred, he chose the summer because you get to go out to places like the beach, which isn’t quite as enjoyable in the colder season. Sophomore Briyan Hernandez also prefers the summer, for a similar yet different reason. “I like the summer because you get to go out more,” he says, which is a fair statement. In the summer, you don’t have any obligations towards school, unless you have summer school. It’s fair to say that not having to do anything is a good reason to love the summer. Senior Anore Barrera is the only summer-lover that doesn’t like the heat, but she prefers summer over winter because her birthday is in the summer. Happy early birthday, Anore!

Opposers of summer who prefer the winter had many valid arguments, as well. Senior Ben Moran has fair reasons as to why winter wins his vote, including the fact that the styles are more fashionable in the winter. In the winter, you get the options of layers and different styles without fear of heat exhaustion, whereas you’re limited in the summer because of how hot it is. Senior Adrian Frausto also agrees, but with a personal touch. “As a man, I have lots of leg hair that can pass off as pants and a ton of arm hair that can pass off as longsleeves,” he says. “I can’t deal with the heat because of the hair, so I prefer the winter”. Some people like the winter because of it’s temperature, and one of those people is senior Breanna Lambert, who claims that, “It’s not too hot, and it’s not too cold. Winter in California is perfect.”

The summer and the winter both have their pros and cons, and people are always going to complain about it being “too hot” or “too cold”. In the end, the seasons will inevitably come and go as Mother Nature pleases. All we can do is enjoy our favorite seasons while we can until it’s time for another season. Whether it’s winter, spring, summer, or fall, the seasons will always be here for us to either hate or love, but remember, the grass isn’t greener on the other side, it’s greener where you water it. Enjoy every season, even if it isn’t your favorite.