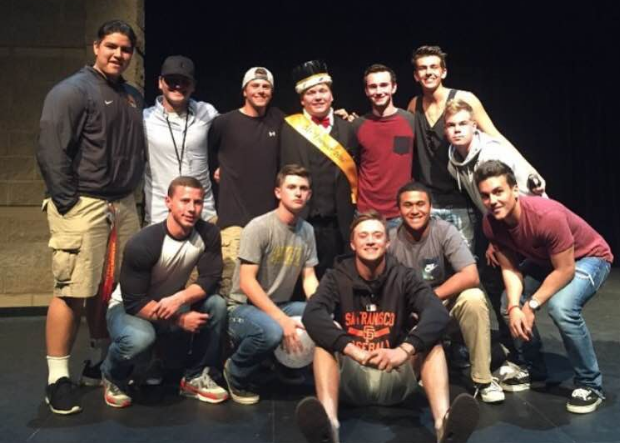 Hunter Stefani, after being crowned Mr. Thunder, is surrounded by all of his close friends. (Photo from Hunter Stefani)
On March 16, in the Buhach Theater, Senior Hunter Stefani was crowned the 2016 Mr. Thunder. Along with being Mr. Thunder, Stefani is the Student Body President. He has been in leadership since freshman year, and has always been a part of the student body council. Leadership teacher John Callihan speaks greatly about Stefani. He states, “Hunter embodies the true spirit of Buhach Colony High School with his unwavering spirit, his dedication to making this school a better place, and his great humor.  He bleeds black and gold!​”

Give a short run through of the day of Mr. Thunder
We had done a lot of rehearsing getting ready for it. In the beginning, we put on a main dance with all of us. Then, it’s our talent and just dressing up. I’m a procrastinator, so the day of the event is the day I got all my clothes and get ready and then I just showed up. Everything just happened so fast, it seemed like it was already over and I was already in a crown so quickly.

Explain the talent that you had.
It wasn’t really about me winning, it was just about me having a good time. I finally came up with the idea to see if I could eat 100 grapes in a minute. I knew it was going to be tough because that’s a lot of grapes and a lot of continuous eating. It was a challenge for me. I was on my 99th grape with three seconds left, and I decided to show off and throw a grape high in the air and try to catch it in my mouth, but I dropped it.

Would you recommend the Junior boys this year to try for Mr. Thunder next year?
Definitely! It’s a good opportunity for people who want to do it. You can make the best of it just with doing it with friends. The more people to do it the better. Ours was really short this year, but if we were to have more people, it would have been even better. ​
Powered by