Joseph Medeiros, A New Teacher to an Old Campus 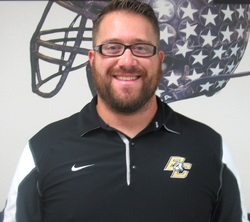 Joseph Medeiros
﻿ A new teacher at Buhach Colony High School, Joseph Medeiros is excited to work at Buhach. Being an alumni of Buhach, and having family on campus, Medeiros has an advantage working at this school. He is working with teachers that taught him when he was in school, and gets to work with his own family. From teaching two different subjects to coaching football, Medeiros has become an active teacher on this campus.﻿

Tell me about the class you are teaching.

Right now I got SCC World History, which is like a functional level for the kids that I have. I only have five students, so it’s pretty cool. We’re real close, getting tight, it’s just a pretty fun environment. You know, less kids. A lot of involvement, they’re pretty good in that class. And then I have a couple periods that is integrated math where I co-teach with Mr. Tanzillo, who is also a new teacher. So, that’s pretty fun. We’re both learning inside the classroom at the same time, learning effective ways to be successful in that class. I feel like so far we’ve had pretty good response from the kids.

What was your inspiration for teaching?

I’ve always kinda had that leader like mentality; I played sports, loved helping people. My dad has been a teacher for the last fifteen years. You know, so I’ve just kinda like that atmosphere. I like being around the kids, and I like helping people so I just kinda fell into it. I kinda knew coming out of high school that I was going to be a teacher

Why did you choose to teach what you are teaching?

Well, I am technically considered a special ed teacher, so basically, I don’t know if you know how teaching works but they stick you where they want you, which is awesome because it kinda gives a little bit of variety of what I am teaching. Instead of just one subject I think its pretty cool that I get to teach the kids some math and history and whatnot.

What’s been your favorite moment this year so far?

It’s still early, but I’m looking forward to the rallies. I think it’s going to be pretty cool. In my class, I think Back to School Night was pretty cool, just to kinda have that one on one interaction with the parents, so being a first year teacher, I thought that was pretty cool.

What is your favorite part of your day with your class?

My favorite part of the day is second and fourth period because it’s that intro to integrated math, it’s a big class but I’m also working with Mr. Tanzillo, Justin Tanzillo, so it’s a pretty cool dynamic, like I mentioned earlier, in that class.

What is something people don’t know about you?

What do you do during your off time?

Well, right now, a lot of work. I am currently still taking classes online. And then I also coach football here at Buhach, so basically I get off of work, then I go straight to football practice, I go home and continue doing homework.

What’s your favorite thing to eat at lunch and why?

So far, I have just been going to the teachers lounge and getting a salad. It’s pretty good. It's not that I’m trying to be healthy, but it’s build your own salad. So, you get to make it how you want it.

What it’s like to work with your own family members?

I think it’s cool. It makes the transition a little easier. Everyday I get to work with my dad and work in the same department with him. Passing different classes, I can pop my head in and see different family members.
Powered by