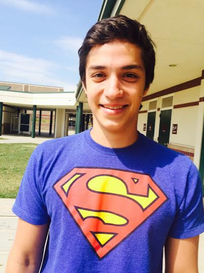 Manu Harrenkamp
Buhach Colony junior Manu Harrenkamp, age 16, is a foreign exchange student that came from West Germany. He has his two parents, and his 21 and 23 year old brothers that he left behind. His goal by the end of his one year stay is “to learn and speak the language firmly.”

What is your favorite thing about America?
I like the people, they’re really open minded.

What is the strangest/funniest experience you’ve faced since you were here?
Some weird questions about Germany, not sure why but people have asked, “Does Germany have cars?”

What does our school have that your old school from Germany did not have?
At my school in Germany we don’t have extracurricular activities. We have to pay to play a sport and where I’m from soccer is the most popular sport. Not only that, but schools in Germany separate students with smartness, as in their knowledge. Also we did not have chromebooks just old textbooks, which in my opinion chromebooks are neater.

What was your biggest fear when you heard you were leaving?
Missing my family and leaving them behind.

Did you want to leave your country/city?
Yeah, I did. I wanted to learn the culture, language, and the people here.

Do you like your new environment?
Yes i love it, it is just sometimes too hot.

Is there any differences you’ve faced since you came here?
Definitely, the school system is way different, in Germany they did not have middle school.

What is the hardest challenge or situation you’ve faced?
At the beginning of the school year, it was hard getting used to everything and having to settle in in this new environment and way of living.

What is one thing you can say about BCHS?
​The people here are really nice, open minded, and it’s a really clean school. I really do like it.