Students have a Ship Load of Fun at Prom 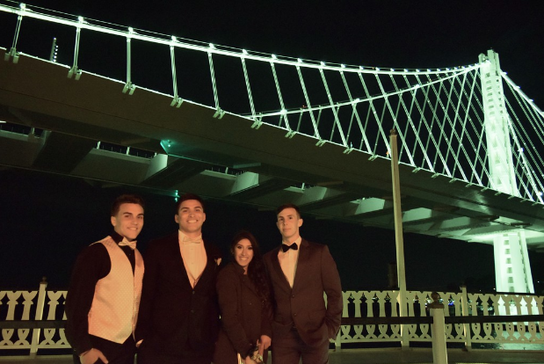 Seniors Connor Soares, Arnold Hopkins, Adriana Grando and Noah Hall pose under the Bay Bridge in San Francisco. (Photo taken by Aaron Brown)
On April 16th, Buhach students ventured out to the bay of San Francisco where they danced the night away at prom. The day started at Buhach Colony High School where the students were drug checked and took their prom pictures. Two hours later, they were all whisked away to San Francisco on a Via bus. The magical moment arrived when over 200 students stepped onto the port of the San Francisco Belle and entered into the “Midnight Romance,” AKA Prom.

The trip down to San Francisco was nothing but fast. All the students sat on the bus with anticipation as to what was to lie ahead of them. Nine Via Buses traveled down the freeway, full of excited students who finally got to wear their most beautiful dress and handsome suits. Nothing could have prepared them for the dazzling moment when they  stepped off the bus and onto the dock of the San Francisco Belle. That was the memorable part for senior Casey Costello. Costello stated, “The best part of prom was getting there and seeing everyone’s reaction to the boat. Everyone underestimated it.”

The moment the students stepped inside the boat, they felt like royalty. The interior of the boat was lined with fancy fabric and gold tinted walls. A buffet was set up in the middle of the first two floors. The food consisted of pasta, salad, rice, bread rolls, and lots of fruit and dessert. Once everyone had their meal, they sat down at one of the several tables that were located inside the ship. Eating went quick as students began to “feel the music”. Soon, everyone was up dancing, or outside enjoying the city lights of San Francisco.

Prom was definitely a “Midnight Romance” with all of the couples scattered around the boat. Some danced on the first floor where the music was fast and loud. Others preferred a slower pace and danced on the second floor, giving them plenty of space for the two of them. If the students weren’t in a dancing mood, there was plenty of room on the dock of the boat and the top for the couples to walk and talk. No matter what, there was always something for the students to do. Senior Bethany Hewitt made sure she was busy throughout the night. From dancing to taking countless photos at the photo booth, she did it all. Her favorite part was getting to be with her friends. Hewitt stated, “It was nice to just hang out with each other because we are seniors and it's our last big thing together.
​
Time passed too quickly as everyone started to line to get off the boat at midnight. Senior Hailey Steffen is one of the students who didn’t want the night to end. “I would totally do it again,” stated Steffen “because it was one of the best nights of my life and I will cherish the memories forever.” The trip home consisted of buses full of sleeping students who used up every bit of energy they could to enjoy the moments they had at prom.
Powered by