​Buhach Begins Breaking Down the Walls 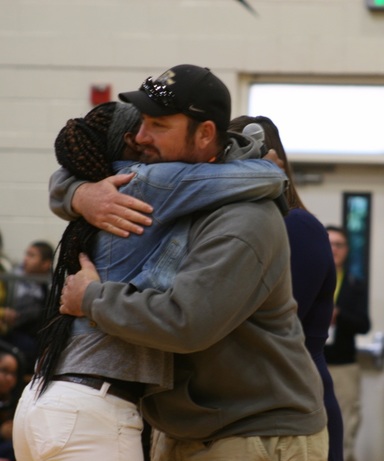 Coach Benjamin Beznoska and bc student Jayla Boyle having an emotional moment at the Breaking Down the Wall assembly.
Students at Buhach Colony High School started off their day, Monday, November 16th, by attending a rally that talked about how our habits can have an effect on those around us. This was to educate the student body on what exactly is “Breaking Down the Walls.”   Breaking Down the Walls is a program that is used to break down barriers and open doors for students. The program was specifically designed to empower, engage, and unify a school as one rather than many individuals. There will be a two-day training taking place Tuesday, November the 16th and Wednesday the 17th. This is for 150-200 students per day that were chosen to be apart of the program and to be the vectors for this incredible new reaching-out program.  This side-by-side student interaction will be a great learning tool to inspire the students at Buhach to reach out, break down their own walls, and just open up to their peers.
After speaking with the administration of  Buhach, it became clear that this program can be extremely beneficial to the environment on campus. Assistant Principal Marcus Knott stated “We have a large number of students that have much more in common with each other than they realize. We want them to be more receptive to building positive relationships with people whom they may not normally associate with.” This points out the truth about high school and the cliques. Groups are naturally created and people are blocked out. With teaching just a group of students at a time how to break down those walls and reach out, with the way things spread in high school, everyone will soon know.
In high school, you're put into classes with groups of people that one may or may not now. Chances are you don't know the majority of your class. This program gives students the tools to do so. Break the chain of seclusion and unite as one with everyone in the school. Leadership teacher John Callahan said this about the upcoming program, “I feel that the people on campus would benefit from getting to know others who they normally wouldn't speak with. By doing that, you grow as a person yourself.” Growing in high school is often hard with all the changes occurring. One way the staff and students can work to change that is by putting this program to good use and taking action.
High school can be filled with an abundance of great things.  This experience is often disrupted by others around campus. Someone who is working hard to make that change is principal Steve Hobbs. Hobbs has a great plan for creating a good environment here at buhach and the Breaking Down the Walls program is only the beginning. Hobbs states “My vision at Buhach Colony High School is to create a campus where everyone is accepted, and our students have  a support system to get connected to school.” This is not a one-man job, but can only be accomplished by the cooperation of the great students at buhach.
Rome wasn't build in a day and it certainly wasn't built by one individual. One quote that comes to mind is “Be the change you want to see in the world,” by Mahatma Gandhi. The students at buhach are all growing up together and going through similar life changing events. If everyone partakes in this change, the walls will be broken down and what would have been a 4 person group of friends is now 50 or 100. Saying hello to someone new every day can be a positive life-changing revolution for Buhach, let’s get started.

Photos from the rally