Another Bitter Sweet Finish for A Christmas Adventure 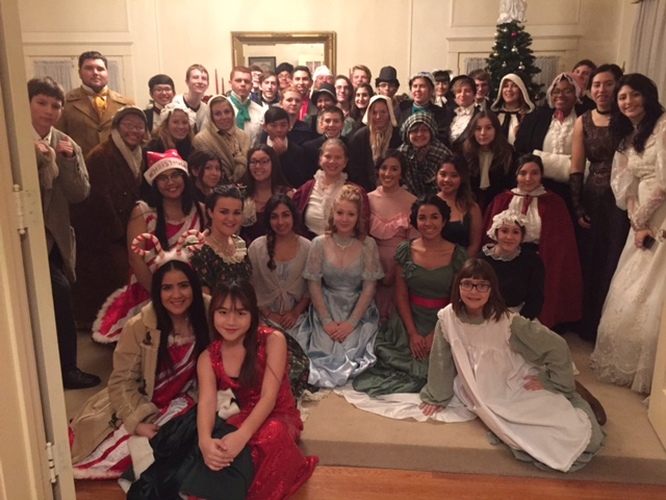 This year’s cast of A Christmas Adventure posing in the living room for the cast photo, just as they have done every year.
This year marked the 16th year of A Christmas Adventure, which is held at the historical Bloss House in downtown Atwater. This interactive play has become a tradition for many families and actors alike. The show was performed last week from Thursday to Sunday for audiences of all ages.

A Christmas Adventure (ACA) is an adaptation of A Christmas Carol, written by Charles Dickens, in which the audience walks through the historical Bloss House and see the story of Ebenezer Scrooge through his eyes. There is a total of eleven scenes and through each scene you see Scrooge’s transformation from a “Scrooge” to someone who appreciates Christmas again. The show was written by Atwater High theater teacher Julianne Aguilar, and it was designed specifically for the Bloss House.

Since 1999, ACA has been performed by ABC Productions (Atwater Buhach Colony Productions) and mix of other schools. Through this combination of effort, they have been able to take on a huge show every year so that the audience can enjoy a memorable experience. Theater teacher Alan Bettis has been working with Aguilar since 2000, while he was still teaching at Merced High. He admits that throughout the years the show has had a lot of changes to either adapt to the times or to give it more technical advances.

ACA, however, doesn’t just mark a tradition for audiences, but it also has become a tradition and a unique experience for the actors as well. Every night, the actors perform, on average, six shows a night (not counting school performances). Each scene is performed over and over again, as audience walks through the house. Although it may seem boring and repetitive, it is actually one of the easiest shows ABC Productions does. This year is the first year that junior Angela Macias had performed in ACA. When asked what was the one thing she was looking forward to the most, she said “I’m excited for meeting new people and making new connections.”

Even though the show takes out a lot of everyone’s christmas shopping due to day after day of rehearsals and run-throughs, A Christmas Adventure has become a part of one of Atwater’s many traditions.
Powered by