Athlete of the Month: Brandon Mendoza 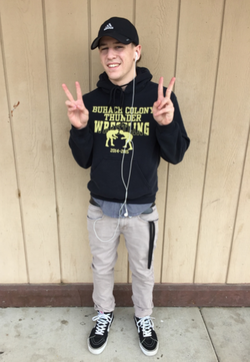 Senior wrestler Brandon Mendoza was chosen as January’s Athlete of the Month. Mendoza is a phenomenal wrestler, who was out for two weeks due to an injury, but still placed first at the Lloyd C Engel Tournament in Escalon. Coach Eric Osmer states that, “In the finals, he avenged a loss from earlier in the year to a State and Section ranked opponent from Oakdale, defeating him in the finals to take 1st place at the tournament.“

When did you start wrestling?
I’ve been wrestling since I was in the fourth grade.

Do you have any strategies that help you win?
I usually just trust what I’ve practiced with my coach.

What do you like about wrestling?
I like how tough it is, because once you do wrestling, you can do anything.

What is the craziest thing you’ve ever seen at a wrestling match?
I’ve seen someone dislocate their shoulder once. It looks a lot worse than it sounds.

Would you rather wrestle a grizzly bear or John Cena?
Probably John Cena, because I don’t want to die.