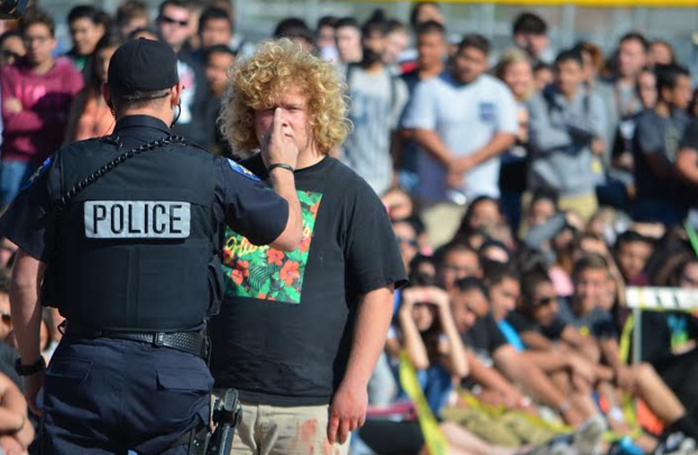 BC Senior Hunter Stefani performs a sobriety test for a police officer during last year's “Every 15 Minutes” program. Photo taken by english teacher Tim Ericksen.
“Christmas, Christmas time is here, time for joy and time for cheers.” Many high school students are awaiting the great christmas break. Two weeks for freedom to celebrate with family and friends. As we know there are dangers everyday but are highly enhanced on holidays due to the celebrating.  The first thought in mind is not what could go wrong but what would be fun, that can very quickly escalate and go terribly wrong. It is good to know what to do and not to do. Also where to be and not to be. Bystanders at parties or associated with anything illegal can get themselves into trouble. BC is a school filled with students and staff, people whom contribute to the school as a whole. Everyone is apart of the BC family and it would be a shame to lose a part of the family over on mistake.
​
Senior Hunter Stefani had some words of wisdom for his peers about the dangers of Christmas break. He stated, “The most dangerous thing I think could happen is someone getting in a car crash. Being involved in the program every 15 minutes last year  was a life changing event and brought in different insight to me about the dangers of not only drinking and driving but just driving.” This program was a very vivid demonstration of the effects of car crashes. Many students were moved in a positive way too rethink decisions, as they should. So I guess my tip to students is just be careful with what you're doing, make good judgement, and have a safe but fun winter break.” All students and staff must realize that your life could be in danger by just being out and about, everyone needs to work together to keep themselves and others safe.

English teacher Kris Freitas stated, “Too many students think partying is okay and they shouldn't be doing it at all. People get belligerent (hostile and aggressive) with it. Alcohol is readily available and that is very dangerous.”All of the statements are very accurate, not all students are doing things that are unsafe but they could be offered or around something of the sort. Freitas then ended the interview with stating “Don't do drugs” thus showing his care and promotion for the safety of the students here at BC.
Campus Cop Officer Meraz had great advice from prior knowledge and experience that he choose to share to help the students at BC be as safe as possible. Some of the most common, dangerous occurrences for teens may not all be what your would assume. Home invasions are one of the 3 that Meraz stated.  This is due to the stock up of holiday presents and money. Officer Meraz states “ Be aware of when they [the students]  answer the doors and to not open them if they don't know who they are allowing into their home. Also burglaries are big during this time. Sometimes they don't know they are not home so let neighbors know when they are leaving or won't be home.” This is big with the younger BC students because they are often times old enough to be left alone but still susceptible to dangers along with every other age as well.

New Year's is often time celebrated with staying up late, parties, and alcoholic beverages. Not only is there the danger of drunk driving, whether your are involved with the alcohol directly or not, but alcohol shock. “Consuming too much alcohol could be lethal. If they get into alcohol shock and could be sent to the emergency room.” Meraz stated. This isn't often known in the age group here at BC but is very real and can very easily end or hurt one's life. Meraz then concluded with some advice for the BC family, “Make good decisions, have an emergency contact speed dial. Also when someone calls 911 say the city you are in and stay as calm as possible.”

Every student and staff member at Buhach is a part of the BC family and the 2 weeks we are not at school shouldn't change the number of people who attend school after break. Good choices may not always be the most obvious but they are the right ones to make. Keep everyone safe by starting with yourself. Have a great break while doing so!
Powered by