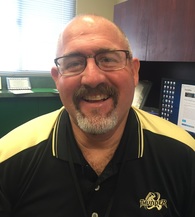 Lance Morrow has been welcomed to Buhach Colony High School as the new principal. He has high expectations of all students and loves to be around them. Not only is he a major supporter for Buhach Colony’s sports, but he is determined to make a difference in these students’ lives. He got his Bachelor’s Degree from Chico State University, and has finished getting his teaching credentials from CSU Stanislaus. We are looking forward to having you in the BC family, Mr. Morrow!

If you could have one superpower, what would it be?
“I would think... a super power to be able to read people better. Read their emotions, read what they’re all about so I could better help them.”

Are you married? Any children?
“Yes. I have three children. A girl, two boys, twenty-two, twenty, and eighteen. My daughter just graduated college last spring, she went to college in the bay area. She is now an Assistant Marketing Director for Hybridge Incorporated.

What is your most embarrassing moment?
“I really can’t think of one.. I kind of put myself out there. I really don’t get embarrassed that much. When things go wrong, they go wrong. Things like last night at Back to School Night, after I introduced everybody and talked and did everything and then released everybody, one of the parents came down and says, ‘Okay, you introduced everybody else but who are you?’ It happens, it’s part of being human.”

Who inspires you?
“Who inspires me? Kids. Right now it’s the students of Buhach Colony. Its why I come to work each day, it’s why I do what I do. I’ll be sitting here working--Ms. Eloise will tell you, and I’ll just get up and walk out! Wander around at breaks, see the kids going to classrooms, seeing what they’re doing. I get inspired by I guess… the youth of America. Right now I would say it’d have to be the kids of Buhach.”