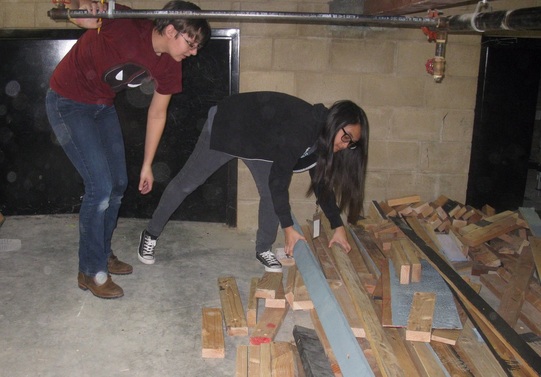 Senior Anna Smith and junior Lace Vangkhue are getting wood from under the stage. (Photo cred: Leeana Richardson)
February is the best month of the year for the drama department here at Buhach Colony High School. In two weeks there will be two different plays in our theater. The first one is Class Action, which is being performed by BC’s Advanced Drama class on February 18th and 19th at 7 PM. The next week, There’s A Boy in the Girl’s Bathroom is being performed by A/BC (Atwater/ Buhach Colony) Productions on February 25-27th at 7 PM. There will be two night performances and one matinee showing. Both tickets are also to be announced.

Class Action, written by Samuel French, is a compilation of different scenes with new characters in each scene. It takes you through the lives of high schoolers through scenes and monologues to show you the ups and downs of high school. You see first loves, broken hearts, fights, new friendships, and more. Senior Anna Smith is one of the five directors for the show, even though she has been in many shows, this one is much different from the rest. “There is a lot of different little scenes, which I am not used to doing. I have to direct and act in it, so it makes it weird to work in different types of roles,” according to Smith. Through the many talents of the small advanced drama class, Class Action will soon be ready to hit the stage.
​
Based off of the book written by Louis Sachar, There’s a Boy in the Girl’s Bathroom is a depiction of the life of a fifth grade bully, who actually never wanted to be a bully. Bradley Chalkers (played by Daniel Arreola from AHS) is the meanest kid at Red Hill School. He is also the most difficult, causing his own teacher to dislike him and be rude to him. However, he wasn’t always this way. Underneath his stubbornness, Bradley is a sensitive kid who just wants a friend. The chance comes when Jeff Fishkin (played by Brent Hopkins from AHS) comes to the school. However, Bradley doesn’t know how to be his friend. Luckily, the school just hired a counselor, Carla Davis (played by Anna Smith from BCHS). Through her counseling, Bradley is able to soften up, and become friends with the people he was the most rude to. The story is heartwarming and just something fun to watch. Senior Benjamin Velasquez says that he hopes that people will take away the idea that, “...a bully has different feeling at school. When he is at school, he is more soft and shows more of his feelings.”

Although both shows are about kids in school, they each have a different moral behind it. Sophomore Devon Lockerby, who is in both shows, states that, “Class Action is better for portraying high schoolers. However, There’s a Boy in the Girls Bathroom has a better story.” Make sure you don’t miss out on the opportunity to see two fantastic shows put on by our own BC Theater Students.
Powered by