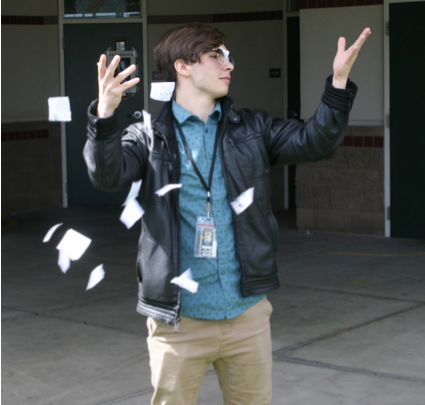 Senior Tyson Caldwell rips his March Madness bracket up with fury due to losing teams, although he still holds hope for Kansas to win it all. (Photo by: Adrian Cisneros)
The madness is upon us, March Madness that is. March 17th  is the start of this year's college basketball tournament and it ends in the beginning of April. Many sports fanatics take this very seriously and they partake in creating a “bracket” on what teams will win. This bracket is just a guess on what team will come out on top. The madness starts with about 64 teams but only one will come out on top. Through the process of starting the 64 teams to the Sweet 16, then the Elite 8, on to the final four, and lastly the National Championship, players work their hardest to come out a winner.  Although there have already been a couple of games and it is getting very close to an end, people are still in the game and so are their teams. When speaking with people here at Buhach, their guesses were revealed.

From way back when to now, physical education teacher Steve Abrams has been a fan of basketball. He also played throughout high school and still follows NBA and college teams today. Abrams is a strong supporter of the NBA with his favorite team being the Lakers, but he has very vague hopes for March Madness. Abrams generally would be pleased with any team of the west coast coming out on top but he has put his luck info Michigan State to take the win. Sadly his predictions, along with many other peoples’, were shot down soon in the tournament. Good luck to Abrams as he plays his bracket with some of his co-workers here at Buhach.

Coming back to present day basketball players, senior Salah Sweeleh is a follower of the March Madness games. According to Sweeleh, March Madness games are better than the NBA finals. Maybe it is the constant unknown of what teams will bring to the court that he enjoys. Sweeleh has chosen the Kentucky Wildcats to beat the Kansas Jayhawks with the justification that Kentucky poses two of the best players in college basketball and have also have been playing very well during season. All the luck to the Sweeleh in his March Madness bracket even though the team he had winning it all, sadly took the L.

Although this is men's college basketball, everyone gets involved, including junior Addison Ralls. Ralls decided to join the braket fun when her family got involved. She describes the process as “interesting and fun”. Which it so very is, with all the guessing and predictions, who knows who will win. Although Ralls hast no basketball experience she trusted her gut and choose some teams that she believed in. Going into the tournament blind Ralls hast made a few bad calls but hopes for Kentucky or North Carolina to win. Hopes are still looking up, but sadly for only one of her two teams.

With all the excitement, it's hard not to have fun making a bracket. It is just a fun way to make some guesses and hopefully win some bragging rights over your friends. In the end all the teams work hard and obviously had previously worked hard to get to March Madness, so props to all participants. Best of luck to all the people whose brackets aren't already destroyed!
Powered by