Dancing the Night Away at the Sadie Hawkins 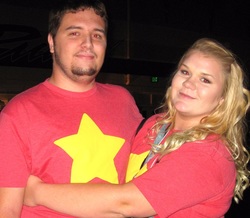 Daniel Reid and Morgan Bricky attends the Sadie's dance together. Click the photo to see the rest of the photos from Sadies. Photo taken by: Rosa Duarte
The Sadie Hawkin's dance was held on September 25 in the Buhach Colony gym. Buhach students, as well as other students from different schools throughout the district, attended the dance. The students of all high school grade years didn’t know what to expect when it came to Sadie’s dance.

When 12th grade senior Jocelyn Godoy was asked what she thought the dance would be like, she responded in thought, “Dark. Hot.” She predicted compared to when she went to the Sadie’s dance freshman year. After the Sadie’s dance during this year, I asked the same question. “It was cool. I liked how they had a section designated for food and games.” She replied.

From what the two seniors stated about the dance, it seemed like it was a success this year. On the other hand, were there improvements to make?

Cortes replied, “I would add a lot more glowing balloons because those were awesome and I only saw two or three of them and more tables at the lounge area.”

Godoy smiled, “It was nice the way it was.”

Sophomore Marisela Cortes (sister to Julian Cortes) attended the dance. It was her first time going and when she was asked what she thought of the dance, she curled her lip, and with an honest reply, states,  “It was whack.” The statement was broad so she added on, “There wasn’t a rad cool DJ.” Cortes was talking about the music that was playing. There seemed to be only a playlist playing and no actual DJ to excite the teenagers even more.

Despite the minor negatives, it seems overall according to the teenagers that the Sadie Hawkins was a success. The upbeat music, rhythm that flowed through the atmosphere, and the smiling teenagers sums it all up. If you missed the Sadie’s dance, don’t worry because after all the positivity of the dance, there will sure be more to come in your following years.
Powered by