Debate Team Blows The Competition Away 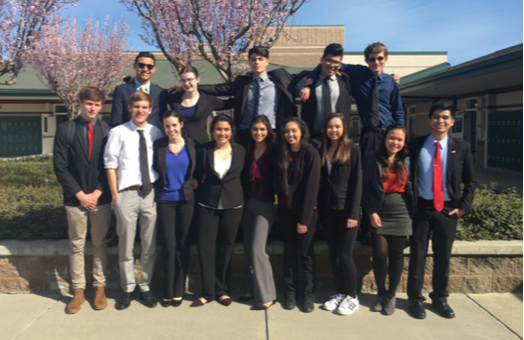 The Buhach Colony speech and debate team is definitely not hiding their fire. Composed of 31 members, BCHS debate is making a mark. These students are accomplishing amazing things in the world of debate, and they are full of potential.
Buhach Colony speech and debate competes in a wide range of events. These events include public forum, Lincoln/Douglas, and Congress. Speech competes in original oratory, original  advocacy, and expository speaking, impromptu speaking, duo interpretation, and humorous interpretation. The speech and debate students are passionate about what they do.
Most people don’t know how much hard work and dedication it takes to be a member of speech and debate. Senior Paige Stapleton says, “Speech and debate is a lot of work- anyone on the team can attest to this; however, it's important to remind yourself that it'll be worth it.” She continues to say, “It's just a lot of hard work, but that is to never be confused with worthless work.”
The foundation of a great team is commitment and focus. The debate team has all that and more. The team, under the management of English teacher Kris Freitas, has only been in operation for a year and a half, but they perform at a much higher level. Buhach was awarded charter status this year and it was done within the time frame of a year and a half. With most teams it takes three years to reach charter status. All students work hard and do certain things to ensure success in competition. Junior Twila Cuenca says that one of the things she does for success is to not just focus on herself, but to focus on the team, because the success of the team as a whole is what makes her feel successful. Other things students do include rehearsing 4-5 times a day before a competition to get ready.
The BCHS speech and debate team has made many accomplishments throughout the last year and a half. The team has competed in Santa Clara, Berkeley, Stockton, Lodi, and many other places. BC speech and debate has qualified for the state tournament twice. Freitas says that the team has hopes of making it to the national tournament this year, which is held in Birmingham, Alabama. With all of their accomplishments from Twila Cuenca and Alyssa Conroy breaking oratory and beating 201 students at the Berkeley invitational.A tournament that had students from all across the United States and China! To three students attending the California high school speech and debate championships at Arcadia High School in California. It is likely that someday they’ll make it there.
If there's one thing that the team members can all agree on it’s that as a team they have great potential. Cuenca says,” It's really difficult to put into words what I believe this team can do. Together, we are an unbreakable team full of intelligent people and hidden potential. Despite occasionally having to compete against each other, the camaraderie within the team is always present and growing. There's no doubt that this team can grow to be even more successful than we are now.” Stapleton says, “I feel confident that the team will continue to succeed in the league. Thus far, Buhach has already been impressionable at tournaments, and I think this will continue to be true for as long as the team exists.” She also had comments about personal potential of the team by saying this, “I think we have some of the most passionate and determined individuals on campus. The team doesn't just want to win, we want to actually work and perform. I think this in itself says a lot about personal potential and determination.” Titiana Vue also mentions that she believes the team has potential, and the expansion of the team will result in many winners and victories.
Buhach Colony Speech and Debate has a great sense of camaraderie. The team members interviewed all agree that they all work together well. Stapleton says, “I love the team. Even if everyone does different events, we still encourage and support each other so everyone can perform their very best. My event of choice is a partner debate, and this differs greatly from several members of the team who prefer theatrical performances. Despite this, we all have so many things in common and we work together as a team. The team has come to bond together very well this year, and it's something I'm very grateful for.” Cuenca says, “I really enjoy the team. We work together perfectly. There's really no way to explain the kind of atmosphere the Speech and Debate team has built. I really hope that we continue to gain more members and they join the sort of family/community we have established under Mr. Freitas.” Vue mentions that they always uplift each other and support each other.
Powered by