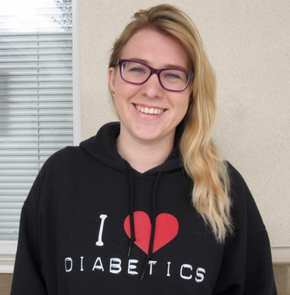 Senior Kelsey Coane smiles at the camera on Nov. 16 before her interview.
Senior Kelsey Coane is a type 1 diabetic who promotes Diabetes Awareness Month for November 2015. People might make false suggestions about a diabetic or diabetes in general, and Coane makes it her job to drive away these suggestions. Coane answered questions about herself and diabetes that people might be puzzled about or just have an interest in.

​In your own eyes, do people view you differently?

I think certain people do because a lot of people assume because I’m a diabetic, I have to be fat or have eaten too much sugar as if I did something to cause my disease when the truth is I didn’t. And so I think there are some people who do view me differently but I’ve been lucky enough to find people who don’t care at all and they’re going to be my friends no matter what.

Is there anything else about diabetes that you would like to add on?

With diabetes I think it’s important to learn the facts and googling it isn't always the best answer. But actually, there are a lot of good websites and so you know if you just tell one person a fact like, “Diabetes is not caused by eating too much sugar” that person can then spread on that fact to so many others. So eventually everyone will realize it’s not something that you cause and they’ll start learning the truth about it. It’s important to spread the word. November 14th is World Diabetes Day and that’s what that day is for.

In a scenario, a person who doesn’t know you have diabetes starts to put “facts” about diabetes that were false, how would you respond or react to that?

Actually, that happens all the time. I try to be polite about it and say, “Hey that’s not true” but sometimes people are like, “Oh, I’m going to get diabetes from eating all this sugary food” and I’ll reply with, “Excuse you, um no, that’s not true. This is how you get diabetes-” I try to inform them but as my doctor had said before, “Sometimes you gotta be sassy to make people listen to you.”

(In these upcoming questions, Coane must give answers relating to diabetes)

What is something you’ve tried but will never do again?

Letting other people ride my quad because they always end up crashing. And yes, diabetics can do everything everybody else can, we just have to keep an extra close eye on ourselves.

What is your biggest pet peeve?

What is your worst habit?

My worst habit is either licking my finger after I poke it or wiping it on my test kit. My parents hate that but I hate wasting tissues with just one drop of blood.

Now is there anything else you want to add about yourself or diabetes?

I’ve had diabetes since I was 2 and half years old. I’m 17 now and it’s hard enough having it. I’ve been lucky enough to have a fairly easy time but I know a lot of people who struggle with it. In one particular video, a girl was talking about having diabetes. She said she was bullied all throughout high school so I asked that everyone just try to understand and be really supportive because I have a disease that I will never get rid of. Sometimes it’s just really hard so I ask that you guys try to help out and not say ignorant comments if you can. It’s fine to ask questions just try to be supportive.
Powered by