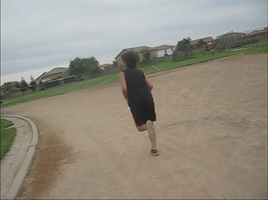 Duarte beginning her run. Photo taken by Jenna Leon
Most could only imagine what it would be like to step into another's shoes. Specifically for me, I stepped into the shoes of a runner for the cross country team for Buhach colony. I was intended to experience the hardships, dedication, and pain of a cross country runner.

During my freshman and sophomore year, I would run the mile in under eight minutes. Unfortunately, time has changed. It isn’t required to take P.E when you reach your junior year which some would actually like. However, I didn’t mind P.E or the running. I actually really liked it...but after two years I lost my touch.

Head cross country coach Alfonso Garcia, instructed me to run a couple green miles on the track. When I first heard him say that, I didn’t think much of it. “It’s a small track.” I scoffed as I headed out of his classroom. Though when I begun to walk closer to the track, it looked much bigger than I remembered it from two years ago.

Initially, I was supposed to do six laps...I had done four laps before my limit was met. During my first lap it was pretty easy. My breathing pattern was very shallow. On my second lap, I started to feel the muscles in my calves tensing up and my panting increased much more. The third lap is where things got a bit tiring. I tried breathing through my nose and kept repeating the thought, “I can do this-no, wait-probably not.” The fourth lap is where things got much more difficult. My heart was racing, my throat was drying, my calves were burning with each step I took. Unfortunately-or maybe fortunately for me-the main camera died, giving me the opportunity to lay out onto the grass with the hope that I couldn’t continue.

I probably would have kept going but I was already on the grass trying to catch my breath-and I don’t think I would have been able to get up for a while.

Keep in mind that I only did a few laps which does not compare at all what cross country actually does. A simple warm up could be running the green mile, 2 laps on the track or maybe half a green mile. Workouts would include group workouts, time trials, and running above the overpass. So if you love running and everything sounds appealing to you, I would definitely recommend taking part of cross country.