Female Musicians of Buhach Colony: “We’ll Fight to Get to the Top.”

Buhach Colony High School is well known for their amazing athletes, talented actors, and our award winning cheer team. However, the school rarely gets involved in the lives of students who aren’t involved in extracurricular activities. Three senior students of Buhach Colony are musicians in the same undiscovered band. These three students were interviewed and asked questions ranging from who inspired them to pursue music to what their long term goals are. 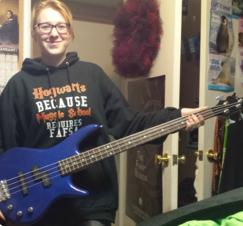 What has inspired you to become a musician?
The bands that I listen to that encourage people to be themselves and to do what others don’t approve of.

What is your long term goal as a musician?
It is to be a band that will play events such as Warped Tour (which is the largest traveling festival in the United States)  and that will tour around the world to play music to fans that are like us. I want to inspire people as other band members have inspired me.
​
If there was one other instrument you could be a pro at what would it be?
Drums. I think drummers are really talented and I have a hard time multi tasking so that’ll be a really hard challenge for me.

What’s the hardest part of being a musician?
Learning how to make music that people would want to listen to are that they can relate to.

Would you rather have no internet or no cell phone?
No cell phone. You can do a lot of things on internet like Skype and Tumblr. 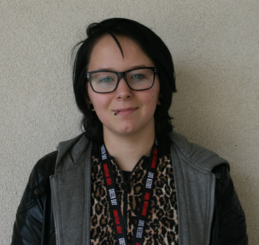 What is your top inspiration to become the musician you are today?
It’ll probably just be my favorite band, Black Veil Brides, because each member has such an inspirational background stories of how they came from nothing and how they progressed. This shows how they became who they are today and that really impresses me.

Coming from a musical background, do you think that has contributed to the way you’ve decided to live your life?
Definitely. Because I grew up with my dad always playing music and listening to bands at a young age contributed to what I love to do with my life.

What’s the worst part of being in a band?
The worst part would be that because you spend so much time with the band you may get on each other's nerves so you have to make sure that you pick people you can get along with at all times.

Would you rather be single for the rest of your life or create an entire new band?
I think I would rather stay single for the rest of my life because I love music too much and I really enjoy the people that I am making music with right now. It would be hard to just change it suddenly cause I’m so close to them and we already have a process, I wouldn’t want to mess that up. 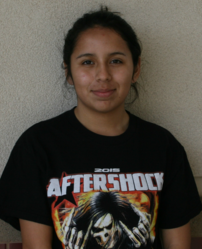 Senior Guitarist Jenna Leon (This part of the interview was done by Haley Locken, writer)

Do you prefer covering songs or writing your own music?
I can’t say I like one more than the other honestly. I love covering songs of the bands, but I love writing my own music. I love being able to put my thoughts on paper and express my feelings through my music and lyrics without having to worry about being judged because I know somewhere out there in the world someone feels the exact same way I do.

What kind of crowd do you hope to reach with your music?
I want to reach anyone who needs support. Anyone who believes they can’t get through life or have no meaning in life at all. I don’t care if it’s teenagers or grandmas and grandpas.

How long has music been a part of your life?
Since I was a little girl. I was actually a really big fan of music and always dreamed of being a pop singer. But, as I grew older and got into middle school I started to listen to bands and I realized that I could relate to bands more than any pop singer out there. They became a huge inspiration to me and made me want to learn guitar and perform at Warped Tour.

What is one thing you would never do on stage?
I would never smash a guitar on stage. I think I would rather sign it and give it away to a fan that I see is having a good time listening and watching our performance.