Football Players Compete their Last Game at the Bloss Bowl 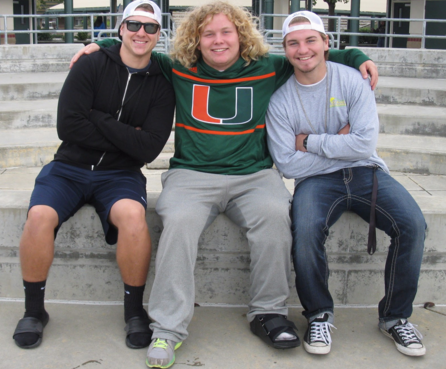 From left to right: Jace Alcazar, Hunter Stefani, Brent Aue smiling at the camera the day after Bloss Bowl
On November 6th, the biggest football game of the season occurred on the field of Atwater High. The Bloss Bowl is a huge event in which Buhach Colony high school competes with AHS. Some would say that it’s a cheerful event especially for the high school students who love the sport. Nothing is better than cheering on your own school from the bleachers. The field is filled with loud cries of joy, strong vibes of happiness, and intense competition. All positive affection from the supporters.

Although, the same can be said about how the football players feel themselves. As you may know, the Bloss Bowl is the last football game and the senior football players are affected by it the most since it is their last game. Of course if you play the sport you love what you’re playing for and what you’re representing. For the football players there would be a rollercoaster of emotions. It’s hard enough to put time and effort into something a person would feel strongly about but it’s harder when it’s time for it to end.

When three football players were asked the question, “How do you feel about the Bloss Bowl being your last game?” all gave responses that were warming but broad. Senior Hunter Stefani replied, “It’s sad, I don’t want it to be my last game and I wish there were playoffs.” Stefani is a well known senior around campus. Stefani being in leadership would explain why he’s so spirited but he also knows when to get serious when it comes to playing football.

Senior Brent Aue is also a well known senior athlete on campus who said, “It’s going to be emotional for everybody-it being our last game, especially for seniors...we have a great offense.” He smiles proudly. Aue is a very funny out going person. His outrageous positive attitude played well on the field.

When playing a game with a team in which you have personally bonded with, or have grown a connection with, it’s hard to break away from such a strong connection. Senior Jace Alcazar expressed this, “I played with this group of guys for 9-10 years, it being the last night playing with them, it was an emotional feeling.”

There’s no doubt this was a touching night for our football players. As for the seniors, they might have some anguished thoughts. However, none could say it wasn’t a great game. Even though varsity lost their game to 23-29, the buhach spirit has not left the football players.
Powered by