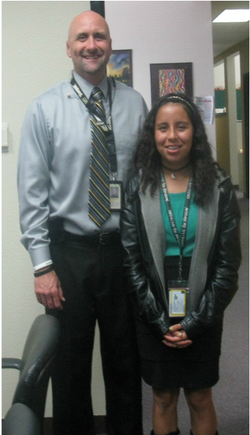 Principal Steven Hobbs and Senior Jenna Leon take a moment to pose during a break in their day
Have you ever wondered what it would be like to be the principal of a high school? Would it be easy? Hard? Fun? Boring? Well, on October 20th I had the opportunity to shadow Principal Steven Hobbs, to examine how hard his job would be. Before starting this experience I felt nervous for one main reason. I was never leader material. Yet as the day passed, I began to realize my nerves were just a figment of my imagination. I had no reason to be nervous because I was just getting a glimpse at what it was like to be the principal of a high school, that didn’t mean I actually had to go through with it though. Thank goodness! For running a high school is not easy like I imagined it to be, it was quite the opposite.
Mr. Hobbs starts his day over before the sun is even rising in the sky. Waking up in between 4:15 A.M. and 4:30 A.M., Hobbs then heads off to the gym where he works out until 5:00 A.M. Afterwards, he heads home where he eats breakfast and gets ready for work. Hobbs is at Buhach by 6:45. I’m barely waking up by that time! When Hobb gets to school, the first thing he does is check his email. He says that he tries to stay on top of that but at times it just becomes too much.
I met with Mr. Hobbs tuesday morning at 7:30 in B9 where they had a department head meeting. Hobbs introduced me to everyone telling them, “This is Jenna and she is writing a very boring article about the day in life of Principal Hobbs.” Everyone gave a small hello before the meeting began. Due to certain topics I was asked to leave for the second part of the meeting. I met back up with Hobbs at 8:00 in his office. By 8:05, we were visiting random classrooms. I noticed that as we got into the welding classes Mr. Hobbs spoke with much enthusiasm. He spoke of wanting to combine the engineering and welding classes together, as well as re-designing the kitchen in Special Ed Teacher, John Hall’s classroom. We were back in his office by 8:45 where Hobbs began to check his email for a second time in the day. Within the first hour and a half Hobbs had received over thirty-two emails. That’s more than I receive in a month's time. When 8:50 came around, I followed Hobbs outside where he would supervise students going from their first period classes to their second period classes. That’s where Mr. Hobbs then introduced me to the liaisons as Joanne instead of Jenna. I corrected him of course and I watched as he said good morning to students passing by. One girl passed by and the liaison Mrs. Kathy Cometta asked how she was doing. The girl then replied with a simple, “I’m better.” So Mrs. Cometta asked if she was having boy troubles. After agreeing Mr. Hobbs called after the young lady, “Boys aren’t worth it. We’re bad news.”
Nine o’clock then rolled around and we were out visiting more classrooms. As we made our way to Hobbs’ freshman daughter Karlee Hobbs classroom, which was taught by math teacher Mr. Rich Cometta, Hobbs turned to me stating, “The worst part of going into administration is that you don’t get to work with kids. I mean I love my job and the people I work with are great, but my real passion is working with kids and I can’t do that in administration, so Mr. Cometta lets me teach his class.”
Mr. Hobbs days sometimes last longer than the average human as well. He says that he leaves work whenever his work is done which can be anywhere from 4:00 P.M. to 6:00 P.M., unless his has supervision. Then he won’t be leaving until around 10:00 P.M. When he gets home, he helps his family feed animals, helps fix dinner, and continues to get ready for the next day. He tries to be in bed by nine, though that doesn’t always happen, he states sadly.
After following Mr. Hobbs around for a day I have come to the conclusion that being the principal of a high school is a difficult job. First, coming in I thought it would be easy. I honestly assumed that all principals did was handle paperwork and have conferences with fellow employers or students and their parents. I have now realized that I was wrong. Principals have to make sure that teachers are doing their jobs and go to meeting after meeting no matter how boring they could be. I have witnessed the struggle that being a principal can bring, and I have the uttermost respect for Mr. Hobbs and the things he does in order to make Buhach a better high school. Getting up at 4:15 every morning and not going home until ten at times is something I know I would never be able to do. I know for sure that I would never be able to run a high school, especially not nearly as great as Mr. Hobbs.
Powered by