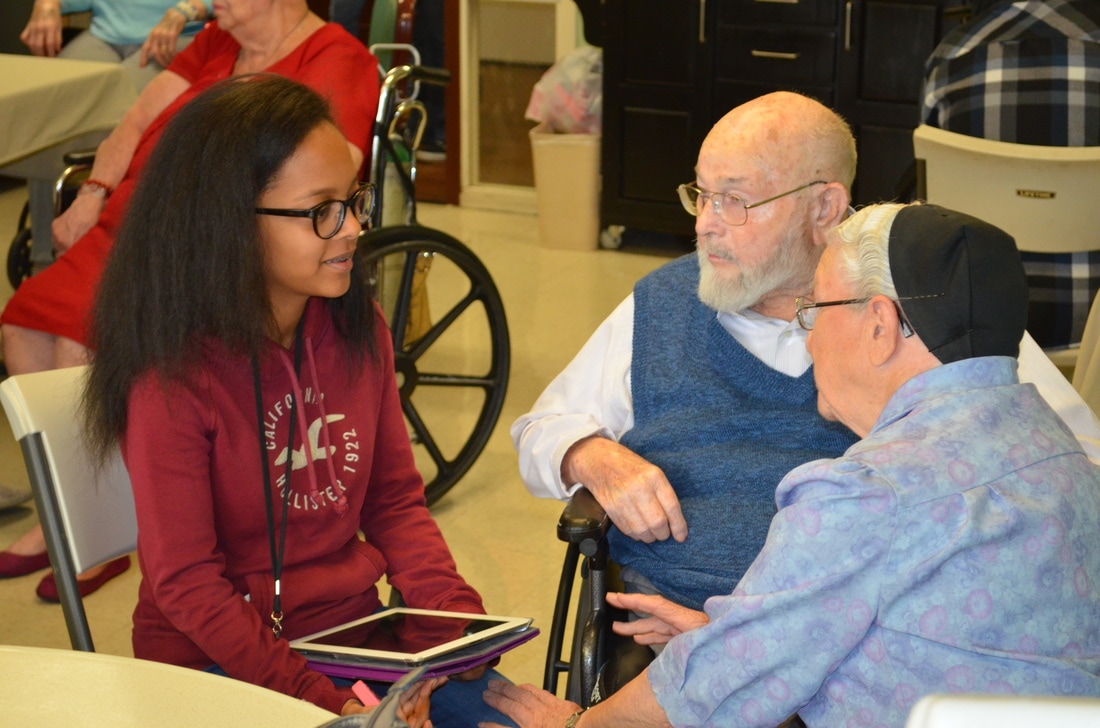 John Jantz is someone that has touched and inspired many people throughout his entire life and still continues to do so till this day. Jantz was born in Kansas. During our interview he reminisced about his childhood of farming and the amazing things that he has been through.
Jantz talked about his hardworking mother that loved to sing,  and he even shared a song that she sang often titled, “There Is No Disappointment in Heaven”. He shared his experience of the Black Sunday 1935 dust storm. It was so dark that the chickens would go up to roost when it was still daytime. When the storm was coming they had to push the car into the garage. The next morning they had to literally shovel the dirt out of the house.
In 1945 he married his beautiful wife Bertha Jantz. At the time he was 18 and she was 17. At that age they weren’t in high school because of World War II. John had a job in food production so he was able to get a deferment(when you don’t have to go to war) and stayed home working. John mentioned how we was a rebel that smoked and drank when he was young, but how going back to the church changed him. At one point he converted, but didn’t last long. He lashed out at the church and was expelled from the Church of God in Christ Mennonite. During that time they created a clubhouse where all of his friends hung out, but at the age of 20, John and Bertha went back to the church. Going back changed their lives, that day they were so moved. The preacher did an alter call. John and Bertha both went up to the altar. When they went back to the clubhouse news had spread that they had been to church. John flat out stated confidently that they were tired of the life that they were living and that they were going back to the church.
When I say that John was an inspirational and amazing person it is no understatement. Not only did all of his friends and his brother go back to the church, but there were 59 revivals and it all started with him and his wife. A few years later he became an ordained minister. As a minister he went on a holy tour in 1974 from Israel, to Rome, and Europe and he spent 8 days in Israel going to biblical. He gave background on his religion and how it came to be.  He also shared a bible verse with me, 1 corinthians 3:11. As a minister he also did mission work in Nigeria for 2 years. They had 8 stations where they had supplies to help people in the communities and told them about Jesus Christ and they would hold church services. John noticed that there was no young people in the church so there was 4 younger people and he baptized them and probably changed their lives. John thinks that the mission work was very helpful and that the people they helped were truly thankful for all that they did.
He retired at the age of 80 and he is now 89. He and Bertha have 6 children, 25 grandchildren, and 70 grandchildren. By living in the Atwater area they’ve seen so much change. They saw Castle air force base open and they saw it close down. John did many great things. He was an almond farmer, a minister, a mission worker and much more than that.  He’s touched so many people, at Anberry he prays for people and helps them with the things they go through.
After 72 years he still has his wife Bertha at his side. She visits him twice everyday and spends valuable time with him. Bertha mentioned to me that he loves to sing and he loves poems, and I was privileged to have him share a meaningful poem with me. It goes, “The clock of life is wound but once, And no man has the power To tell just when the hands will stop, at late or early hour. To lose one's wealth is sad indeed, To lose one's health is more, To lose one's soul is such a loss That no man can restore.The present only is our own,So live, love, toil with a will, Place no faith in Tomorrow, for the Clock may then be still.” - Unknown. In October he’ll be 90 and he says that the purpose in life is to serve God and to serve people. At the end of the interview he made a joke about my holey jeans by saying, “ If you need more money to buy new clothes…” , and we both had a good laugh to conclude our wonderful time together.