Let’s Give a Shout Out to Buhach Clubs and Sports

Varsity Boys Basketball coach John Bliss is turing in his whistle after 28 years. (Photo by Merced Sun-Star)
History teacher John Bliss has been known as Coach Bliss for 28 years. He has committed many hours of his life to his teams. Throughout his commitment, he has lead his teams to many victories. “I have truly enjoyed these years and all of the tremendous young men and women student/athletes that I have had the pleasure of coaching,” states Bliss. Though he may be sad about leaving the coaching world here at Buhach, he is glad that he is now going to have some free time. Being coach meant that he had to give up a lot of time to work with the players. Now he has time to be with his family, which he has been very grateful for their support. Thank you for all your work, Coach Bliss! 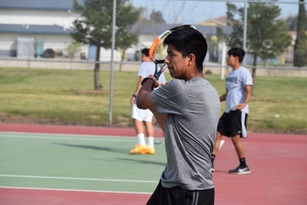 Junior Adrian Gomez gets ready to hit the tennis ball coming his way. (Photo by Aaron Brown)
No one was expecting the debate and speech club to do so well, seeing as this is the first year Buhach has had the club. Within the past three months, the team has competed in several competitions. Within each competition, the team has won at least one award. Now they are being recognized by the National Debate and Speech Association. English teacher and club advisor Kris Freitas stated that, “The team consists of some very intelligent and motivated individuals. They want to be the best they can and they work very hard.” Through the hours of dedication, the 15 students set aside their time to make sure that they are ready for each competition. If they keep this up, the team will have the chance to compete in Salt Lake city in June. As Hobbs would say, go kick some butt!

The boys tennis team competed in Fresno this past weekend, placing them as Division 8 Champions. BCHS played against Hanford High School, Fresno Christian High School, and Kingsburg High School. The players won by a landslide against all three schools. “The team worked together and supported one another,” boys tennis coach Natalie Benoy stated. Benoy was also very lucky to have junior King Phomphakdy and senior Taylor O’Rear as their supporters throughout the entire season. Keep up the good work, boys.
Powered by