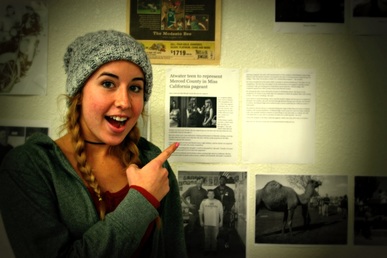 Mary Loera is shocked and excited by the article hanging on Mr. Ericksen’s wall.
On January 16th of this year, our own Senior Class President, Mary Loera was crowned as Miss Merced. Loera has competed in several sports and so she knows about competition and how it feels to win. However, nothing could have prepared her for winning Miss Merced. She is now the new face for Miss Merced County. From the journey before becoming Miss Merced to the new challenges that she is going to face this next year, Loera tells it all.

So can you explain the process that it went through?
We have rehearsals every week for about 5 hours and during that time we practiced for interview and were given a heads up about what questions we were going to get asked. We were educated on what events were going on right now. For the actual day of the pageant we went in at 9 o'clock and did our interviews separately. There was a panel of about 7 judges and they just go along asking you questions. Later in the evening we have to go through the actual pageant and that entails the opening number and then after that it's an on stage question, so every girl goes up individually and they answer a question to the best of their ability. It's just a random question. After that it's a swimsuit number, so they test our physical fitness. It's not necessarily how skinny you are, it’s saying that you're healthy and take care of yourself. We do a swimsuit walk and then after that it's our talent. 35 percent of the vote is talent. After that we have our evening gown walk where it's like the calming down of the day. We get awarded if we won any scholarships or for runner-up. That's like the whole pageant in a nutshell.

What were your emotions the initial moment you were crowned?
It took me a little bit because I was like, “Wait, Mary Loera, that’s me.” I just didn’t think about it at first. It didn’t seem real at first. Once I got it, it was kinda awkward because it takes awhile to pin the crown on. I was so happy. I really didn’t expect it.

Have you competed in a pageant before?
No, that was my first time doing anything like that.

Did you think you were going to win?
No. Honestly, I was there because I heard it was a scholarship program that if I competed, I would get a scholarship for college, whether I won or was runner up or anything. I was just happy to even compete, because I mean winning was great, but even getting the $250 scholarship would be great for college.

What do you look forward to the most as being Miss Merced?
What I look forward to is my platform because as you know Mr Hall has a huge program for PALs (Peer Assisted Learning) and a lot of the other campuses in our district has nothing like that. They just have the challenged students go to their classrooms and is not a lot of PALS that actually confront them and do crafts with them like Mr. Hall does. But I was really looking forward to is just expanding my platform and making it more know to other schools.

What are some responsibilities you have now is Miss Merced?
Now that I'm the face of the Miss Merced County Organization, I have to be my utmost modest. I can't be risque anything because I have to be clean and be a good example for others. I have to go to other school sometimes and talk to them [the students] about education and how important it is to them, and also luncheons with officials. Just mainly just setting a good example for the other kids.

Are you excited for taking on the role as Miss Merced?
Yes, definitely. I have a pretty full schedule right now. I just went to the meeting about what all it entails and it is [her schedule] pretty full up until college. They want me to focus on college because I am hoping on getting into a UC, and my top choice is UC Davis. That will take a toll because I won't be able to come back too often until Thanksgiving or the holiday’s to make appearances. Besides that, it’s a handful, but I am so glad to be doing it. I never expected this at all.


Are you looking forward to running for Miss California?
Definitely. I know I don’t expect to win or anything but definitely. I’ll get so much advice out of it because we have orientations before, we meet all of the girls, we get luncheons and mock interviews, to just expand on our knowledge and learn new things. Most of all, making new friends.

Do you provide your own dresses and all of that?
No, because since it is a scholarship program, I am not suppose to even buy any of my clothing because, they don’t want you going out and spending your own money. Your suppose to be making money for college through this. So, they provide me with any clothes, or gowns, or shoes, anything that I need. They accumulated a lot of dresses throughout the years that they have bought or were donated.

Do you recommend this for the girls hoping to compete this year?
The girls have to be seventeen years old, and if you are younger you can compete for Miss Outstanding Teen (which is ages 13 to 17). Even if you don’t think that you're gonna win, or even if you don’t have a particular talent like dancing or singing or sports or anything like that, you can still compete because their are options like monologues and anything of the sort. Anyone can do that. Even for just competing, you can get a scholarship out of it. You get a lot of friends, and just a lot of things that can help you throughout college.
Powered by