ROP Health:
​Taking care of an infant, not as easy as you think. 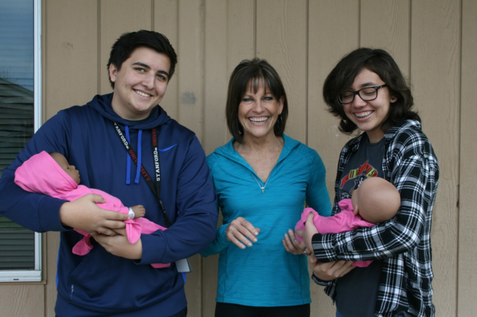 Junior Saul Perez, Physical Education Nancy Williamson, and Senior Jocelyn Godoy posing with fake infants. Photo credit: Rosa Duarte
High schoolers don’t think about the hardships of taking care of a child. That’s where physical education teacher Nancy Williamson comes in. Williamson or Will, teaches a class called ROP Health. People who take her class learn how to prevent from getting sti’s or std’s, sign language, how to take blood pressure and heart rate, etc. Though, there is one assignment that catches everyone’s attention at school and one assignment that gets her class excited for. That is taking care of a fake newborn.

Four teens at a time are able to take care of the fake infant for two days. For it being a fake baby and high schoolers not knowing the difficulty of taking care of a child, most thought it would be an easy assignment. Senior Jocelyn Godoy says, “I thought it would be easy and then it turned out to be super hard.” Godoy says about her baby Lucille, “The hardest part was how it kept waking up in the middle of the night. It didn’t matter what hours, it just woke up.”

Junior Saul Perez agreed with Godoy. He states, “You just don’t know when it’s going to cry and it’d be difficult to figure out why it’s crying.” Perez says about his fake infant, Nacho, “I did think it’d be easy, but it just became harder...but then it became easier as time went on.”

Will does understand why it’s hard to get up in the middle of the night, but knows it’s part of the learning experience. Will firmly says, “I want them to learn the difficulties and the problems involved in taking care of an infant.” She adds in, “They have to figure out if it needs to be fed, diaper changed, burped, held, whatever.” Will knows the progress their students are making. She says, “The baby will tell me everything that they [students] will do.” Each infant has a cart or charger that once it is plugged back in, the information will be sent to Will’s computer. It shows how long the baby was crying for, if it was fed on time, and much more.

Even if the assignment isn’t as easy as most students thought it was, they did learn a few things from it. When asked what they learned about the assignment, both Perez and Godoy gave responses about their experience. Godoy smirked, “Babies suck and I’m not going to get pregnant anytime soon.”

Perez smiled, “I learned that taking care of babies is really hard and they’re unpredictable.”

By these statements, it seems Will has accomplished showing the difficulties of taking care of a newborn. It’s not an easy thing to do. It takes time and patience to take care of a child. This was fake infants, imagine taking care of a real one. Will’s class teaches how hard it is, but isn’t saying you shouldn’t ever have kids. All she wants you to know is that it isn’t easy taking care of one. ​
Powered by