High school is a time in your life where you learn about yourself and truly unravel the individual you are. The transition from middle school to high school can be difficult, but as the years go by you discover that it's not so bad. Freshman typically drive themselves into oblivion. More or less they are a naive child thrown into a jungle of diverse individuals all with different aspirations. Months pass and he or she starts to get familiar with their daily routine as they slowly start discovering things they thought were unimaginable. Mischief is greatly abused as the years go by with many friendships arising, as well as the few which plummet. The child no longer naive, starts to comprehend and adapt with their daily struggles of stress, work, and social contributions. It's quite the experience if you ask me. The days go slow, and the years fly by. With this time well spent, the  prize of knowledge comes in hand.
​
Three students at Buhach Colony High School were asked a series of the same questions to get a taste of their high school experience. In this social experiment, it was made sure that a diverse group of individuals with different personalities were chosen. ​ 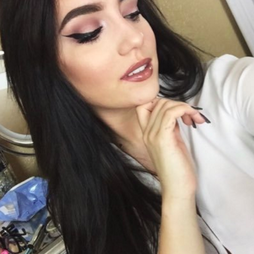 Senior Ally Cervantes with a picture of herself and her makeup art.
First in line is Ally Cervantes. She had a burning passion for her makeup art and even has her own youtube channel with tutorials on the subject. Cervantes was asked to describe high school in four words. Her response, “People change, time flies”.  Cervantes was then asked to explain what she learned about herself these last four year. “I learned that I am an independent individual and emotionally strong”. Now employed, she relies on no one but herself on a financially standpoint. Her next question asked if she could change anything about herself in the last four years, what would it be? “I'd definitely would have focused on myself rather than wasting my time in a high school relationship”. Cervantes stated that she was in a relationship about two years. She was then asked to explain the difference from herself her freshman year and senior year. she replied with, “I was immature my freshman year and had no idea what I wanted to do with my life, now I've grown up and have a direction towards what I want to do in my career”. Cervantes would like to become a professional makeup artist. At last she was asked for her favorite high school memory. Cervantes stated “Having my friends over during the 2016 new year and having the best night of my high school”. 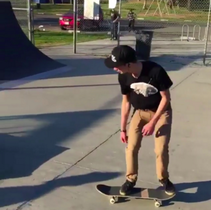 Senior Louis Casares skateboarding at the Atwater skate park
Next up is Louis Casares. Casares loves to skateboard. He has been doing it since he was a child and plans on getting sponsored by a professional company. He is very skillful in the sport, he work hards everyday in the hope that it will be paying off. Casares was asked to describe high school in four words. “This school is weak” he replied not so enthusiastic. He went on to say how his love for skateboarding can not be taught through a classroom. Next question asked him to explain what he learned about himself these last four years, “I’ve learned what I care about and who I am.” he stated that he knew he loved skateboarding the moment he stepped on that deck. His next question asked if he could change one thing, what would it be? “Damn, if I could change one thing I think it'd be the first day I smoked, its not like do it that much anymore you know? but I definitely would change that”, with a laugh to end his response. He was then asked to explain the difference from himself his freshman year and senior year. “I feel like my freshman year everything was a lot harder, now than I am a senior it's pretty easy.” The final question asked him to describe his favorite memory in the last four years, his response, “watching a fight at school.” Quite the individual he was. 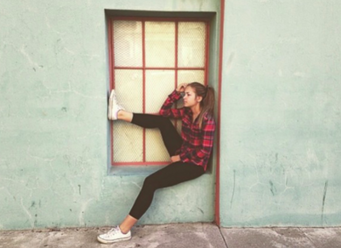 Senior Johanna Mayer sitting and looking into the distance
Last but not least we have Johanna Mayer. Mayer is well known student throughout Buhach Colony. She is best known for having fun and making the best of times. Mayer was asked to describe high school in four words. Her response, “Experiences, Stress, Crushes, Rebirth”. Mayer believes that one must be spiritually at peace in order to confine with the laws of the universe.  She was asked what she learned about herself in the last four years. “I've learned that I need to chill a little bit more and not take things so fast,” with a smile to end her sentence. Mayer loves to have a good time whether it's a Music festival or a  rally at school.  Her next question asked if she could change anything about herself in the last four years, what would it be? she replied, “I don't think id change anything, because if I did, things wouldn't turn out the way things are now, and I love myself now” with a smile.  She was then asked to explain the difference from herself her freshman year and senior year. Her response, “My freshman year I was inexperienced, now I'm experienced and more wise and intelligent.” Mayer has a wide range of knowledge when it comes to just about anything. Its seems as if she is the guru of the school. The final question asked what her favorite memory in the last four years was. She replied with, “Junior year prom was easily my favorite memory, it was the craziest type of joyful I've ever experienced in my four years of high school.”  ​

High School can either be a great place for you, or a place that you possible learn to hate. The four short years are what you make of them and the time is never wasted. I wish the best of luck to all four students for what comes after high school.
Powered by