Should BC Have Off Campus Lunch? 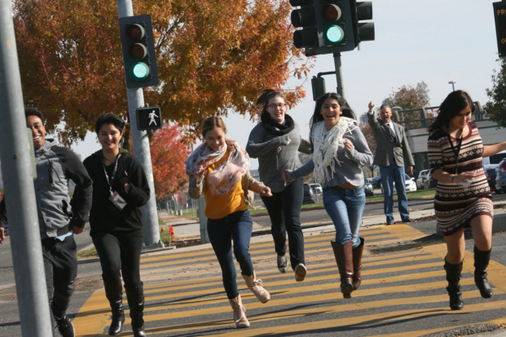 (Left) Donald Smith, Rosa Duarte, Jaycee Isacson, Leeana Richardson, Lorna Soto, Miriam Sanchez (Right) Bc students make a run for off campus while angry english teacher Tim Ericksen yells for them to return. Photo credit: Jenna Leon
As many know Merced and Golden Valley have the privilege to go off campus to have lunch, and other schools like Buhach,Atwater, and El Capitan don't have that privilege. We may find it unfair that they can go off campus and we are forced to eat the cafeteria lunch which some people don't like. Why can't we go off campus to eat lunch that we crave and want to spend our money on? Many students would agree that we should be able to leave campus and eat at a fast food restaurant of our choice.
​
Senior Carlos Rodriguez stated, “I think we should have off campus lunch, it gives us more options to eat, and also we are helping the community by buying food from the fast food restaurants.” Another person that is in favor in this idea is senior Jessica Betancourt, she said “ Yes we should have off campus lunch, because it gives us the freedom to choose what we want to eat, but also it gives us a responsibility to make right choices to not do something dumb and come back after lunch is over.”

Others don't think it would be a very good idea, senior Mallory Cordeiro stated “ It wouldn't be such a good idea, it's probably a good idea for Merced and Golden Valley because the restaurants are right across the street, walking distance. In difference we would have to drive to where we want to go, also the school probably has to have contact with the restaurants so they can have a idea how many students are out, and make sure that they come back to school”. Cordeiro isn't the only one that believes we shouldn't have open campus, Junior John Lomeli said, “If we have open campus, we will just go home and not come back to school after lunch.” Off campus could be a good and bad, maybe if the school made you earn off campus lunch students would appreciate it more. One thing the administration can do is get the students that have extended lunch and give them the choice to go off campus to eat lunch so they get to choose if they want to leave campus or not. Students are most likely going to have more motivation to get good grades if they want to eat off campus.
Powered by