Stay On Top With The Thunder News 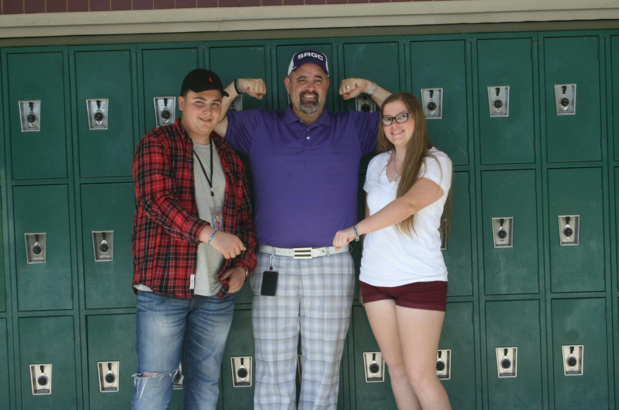 Freshman Joseph Montoya and Chloe Silva support Rich Cometta by wearing his bracelets. (Photo by: Jenna Leon)
Cometta Update: Teacher Rich Cometta is done with treatment but he will not know the results for a couple months, but based on how he felt through it, he feels confident that the treatment went very well and it was successful. With that being said, Rob Garrett made bracelets for Cometta that said, #richwillwin and #teamcometta. Garrett started the bracelets due to the fact that his son passed away from a tragic accident at a young age. The bracelet is in honor of his son and to pay it forward! Cometta stated, “I was completely caught off guard by the wonderful gesture that Mr. Garrett made with the bracelets. The message on the bracelet, pay it forward is something that we try to do all the time. To be on a bracelet with the message, the hashtags and also with Robbie Junior, it was quite an honor.”

Grad Night 2016: The total cost of Grad Nite is $175. This price is included with the entry to Six Flags Magic Mountain, an all you can eat buffet dinner and early access to rides prior to the park opening to the majority of other schools in attendance, and transportation on VIA bus. It is a first-come, first serve event. It is required to pay a minimum deposit of $100.00 by Friday, April 22nd to reserve your spot. The remaining balance $75.00 is required by May 13, 2016. Grad Nite will be on May 26th and tickets will be sold before school, at lunch and after school only in the Student Body Office! Seniors, hurry up and buy your tickets and enjoy your Grad Night because it’s your night!

Summer School info: Summer school’s deadline to make up classes/credits is April 15, 2016. The first session goes from June 14th - June 30th and session two goes from July 1st- July 20th. The classes being offered to make up are to be announced.

The classes that are being offered to get ahead in credits are Art 1, Art 2, Art 3, Art 4, Health Wellness Life, Span Speak 1, Span Speak 2, Spanish 1, Spanish 2, Spanish 3, U.S. History 1, and Wld His/Cult. The deadline for getting enrolled in classes to get ahead are to be announced. You can sign up for summer school classes in H-10 or B-06. ​
Powered by