Students of Buhach Colony Stand Together to Fight Against Bullying! 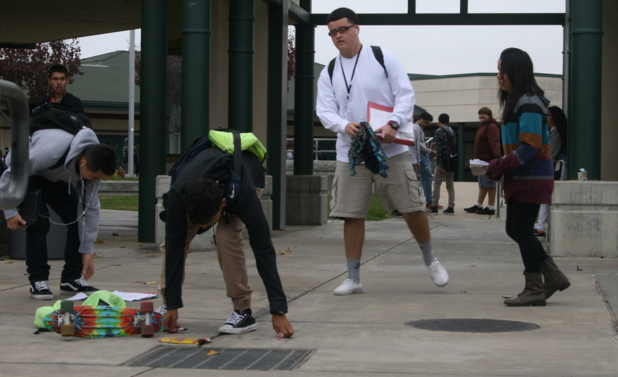 Junior Eli Saephanh, freshmen Oscar Romero, and junior Alberto Arevalos, help senior Jenna Leon pick up her belongs after witnessing her being bullied. Photo Credit, Rosa Duarte.
Over 3.2 million students are bullied every year. Bullying is the main cause of suicide, which happens to be the third leading cause of death among people between ages 10 to 24. On Monday December 7th and Tuesday December 8th, seniors Dylan Stickles, Jocelyn Godoy, Jenna Leon (me), Alexander (Alex) Nava, and Jaime Davalos took part in an experiment on whether their fellow classmates of Buhach Colony would step in while they witnessed the disgusting act of bullying. Some students stood by and watched the scenes unfold in front of them while others lend a helping hand.

Therefore, Monday December 7th, Stickles was verbally abused by Godoy and I, both abusing him at different moments during lunch. During the first transaction between Godoy and Stickles, two young men stopped eating their lunches to bend down and help Stickles pick up his papers that Godoy had knocked out of his hands, due to Stickles bumping into her by accident. The two young men immediately knew it was a social experiment which is why they didn’t get any liaison involved.

Later on during lunch, Stickles was walking up a set of stairs to bump into me, who then took a step further and slapped his folder out of his hands, kicked his papers away and even crumbled some up, tossing them in the garbage nearby. No one stepped in then to help Stickles who walked away with his head hung low, though many students turned and watched the actions unfold.

I later went back and asked junior Alexis Guerra why she watched the scene unfold, but made no actions as to stop me from verbally bullying Stickles. Her reply was simple, “I didn’t step in because I just saw a little girl with anger issues. I didn’t want their problems to become mine.” When the day ended I asked Stickles how it felt to be bullied, even though he knew it was all an act. He seemed down as he thought back to lunch time stating, “I felt terrible after being bullied because they were mean to me. I felt stressed out and I felt anxiety disorder stuff and I felt like I was going to die slowly. If I saw bullying I would stop it to the full extent of the law. I would get the AP to get them in trouble. If the bullying continued I would slap them across the face a billion times.” Godoy, who was the bullier hated the fact that she had to pretend to hate someone. She stated, “ I felt very conflicted on why I was doing it, even though I knew it was all just acting. I felt like a terrible person after seeing the looks on his face, even though I knew it was all an act.” Aside from the two boys who helped Stickles pick up his belongings, no one bothered to stand up for Stickles during this time.

However, this was not the case on Tuesday. During the first stage of the experiment, I was walking by seniors Jaime Davalos and Alex Nava. Davalos had called out “nice backpack,” to me as he grabbed it. He then continued to throw my backpack back and forth with Nava, taunting me and making me beg for it back. Senior Johanna Mayer told the two boys to leave me alone and stop bullying me, but continued to walk away, she stated later during our interview, “I thought they were your friends because it looked like you smiled. I had looked back to make sure and saw someone else had stepped in.” After she walked away Davalos then began throwing my things out of my bag and onto the ground, but was cut short as junior Alyssa Salas, and junior Florhavila (Flor) Partida stepped in. Salas had grabbed my backpack, while Partida helped me picked up my belongings from the ground. Taking them away from the scene, I let them know that it was a social experiment to see whether or not someone would step in when they witnessed bullying. Salas shrugged after hearing my question on whether or not she was afraid that Davalos and Nava would’ve turned their bullying towards her if it wasn’t an experiment and Salas replied with, “I wouldn’t care because I can stand up for myself but I want to help people who can’t stand up for themselves.” When I later asked Partida how she felt when she saw me getting bullied, she answered, “Well, at first I thought they were your friends, but then I saw them throwing your things onto the ground and I thought it was extremely rude, if they didn’t stop I would’ve gotten someone to beat them up, or called an adult to stop them.”

Afterwards, we moved into D Academy. Davalos and Nava were walking past me as Davalos yet again grabbed my backpack. Nava and Davalos threw it back and forth before dumping the contents of the bag onto the floor. As I bent down to pick it up senior Ruben Lua appeared out of nowhere. He bent down, grabbing my remaining belongs as he held open my backpack to help me put my things away. “Why did they do that to you?” Lua had asked, watching as Davalos and Nava made their way to the front of the academy. I then proceeded to tell him how it was a social experiment which allowed him to laugh a little. Later during the day I found Lua and asked why he was so kind as in to help me when he didn’t know me. Lua gave a small smile as he honestly replied, “Why not? I mean we got to help each other. You can’t be a better person if you don’t bring happiness. And you can’t bring happiness if you just leave someone down like that. If I didn’t know it was a real social experiment I would’ve went over to them and told them to stop and leave you alone. I don’t believe in violence solves anything, so if they didn’t leave you alone, I would’ve been there to make sure it didn’t happen or I would’ve told an adult.”

Finding another place to demonstrate our social experiment was easy. We moved to the front of the theater, where we thought a group of guys’ would be a perfect target to see if they would step in and stop me from getting bullied, however it didn’t work out as planned. Assistant principal Kurt Kollmann had seen Davalos and Nava throw my backpack at each other, over my head so it was out of reach. Kollman then grabbed my bag from Nava and was about to take them to the office, when I stepped in explaining how it was a social experiment. Kollman apologized for messing the experiment up, and turned to leave. In the end I asked Kollman for his thoughts on how he felt when he saw I was getting bullied, and what he would’ve done if it wasn’t a real social experiment, but rather a real person getting bullied. Kollmann had strong thoughts. “My first impression was who do they think they are coming onto my campus to harass a kid. Those guys were going to get suspended, phone calls home, parent conferences, the entire nine yards. People don’t think we take bullying seriously, but we do. It needs to have an end put to it.”

Even though we didn’t get the reaction we were hoping for, Davalos, Nava, and I agreed to do the experiment one final time. As I made my way past them, heading towards H Academy, Nava had ran up behind me, grabbing my backpack. He laughed as I jumped up, trying to get my bag which he was holding above my head, out of my reach. He then began to toss it back and forth to Davalos who threw it back. Nava began throwing the contents of my bag out onto the floor and it didn’t take long before three guys’ came to help me out. Freshmen student, Oscar Romero was the first to begin picking up my belongs followed shortly by juniors Eli Saephanh and Alberto Arevalos. After helping me gather all of my belongings the three made sure I was alright, and that’s when I told them it was a social experiment, and to not be made at Davalos and Nava who had walked away, but were making their way back towards us. The following day I interview all three young men, asking them the same question on why they helped me when they didn’t even know me. Arevalos was the first to answer, looking a bit uncomfortable. “I don’t like people getting bullied and it looked bad.” Saephanh shuffled from one foot to the other, thinking about his answer before replying, “‘Because I felt bad so I stepped in. I’m a person who gives out a helping hand. Romero didn’t have to think as he answered with, “I just thought it was so messed up so I decided to help you. I don’t want anyone to be getting bullied.”

When I decided to try this social experiment out, I expected certain things to happen. I figured no one would step in when a female bullied a male and after the first day, my assumptions turned out to be right. I would admit that being a bully, even in acting was an experience I would never want to repeat. It took everything inside of me not to cry as I saw the look on Stickles face as I yelled at him to watch where he was going. Seeing that no one stood up for Stickles made me feel even worse. However, when the day came to where I was the one being bullied many people stepped in. A few of the people even looked like they wanted to go after Davalos and Nava who didn’t like the experiment anymore than myself. Davalos stated, “ I felt bad, I just wanted to help you out even though I was doing the bullying. After receiving Davalos statement I went to Nava, asking him how it felt to be a bully, even though it was only acting. Nava shook his head as he remembered back. “I felt weird. I was going to be seen as the bully of the school, even if it really wasn’t me. It was an out of body experience, and I wouldn’t want to do it again.”
Powered by