The One and Only, Wrestling Legend Brandon Mendoza Dominates for State 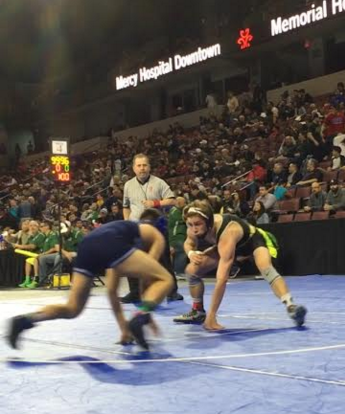 Senior Brandon Mendoza stares down his opponent at the state championships. (Photo credit: Unknown source)
Senior Brandon Mendoza qualified for state on March 5, 2015, which took place in the Rabobank Arena in Bakersfield, CA in front of 10,400 people. The format at state championships is double elimination. The first day at state championships, Mendoza lost his first match that left him discouraged, but he managed to keep fighting and ended up winning 4 matches in a row. Mendoza lost his first and only match the second day of being at state which was known as the “blood round.”
Mendoza has been in wrestling throughout his 4 years at Buhach Colony High School, but that is not where his dedication to wrestling ends. Mendoza has been doing wrestling since he was in 4th grade meaning this is his 8th year dedicating himself to the sport. During his wrestling season, he would practice everyday of the week and that included running, lifting, and wrestling with other teammates. Coach Eric Osmer stated, “Brandon is one of the hardest workers I’ve ever had. He is the one of the best leaders we have ever had. Our CCC Championship and success is directly related to his dedication and leadership to our program and sport. He made it to State and did very well at State due to his work ethic and laser like focus as he approached every match one opponent at a time. He never gave up. Even when he lost his first match at State, he gathered himself and went on a 4 match winning streak. I was very proud of what he accomplished this year and how well he did at state. He took the lessons that I have taught and the lessons that wrestling has taught him and applied the life lessons to their fullest.” When it came to state, he would do plenty of things on his own to get him prepared for competence. Mendoza tried his hardest and never gave up. Mendoza stated, “Coach Osmer can be really hard headed at times, but if he is being hard headed then he just wants to bring the best out of you.” Mendoza was glad to make it to state and he well deserved it with his hard work and dedication.

What will be the thing you will miss the most about wrestling?
The thing I will miss the most is my team because we were always having fun moments at practice and tournaments.
What advice can you give to future wrestlers?
To be good, all you have to do is put time into your wrestling everyday.
How did you feel about making it to state and why?
I kind of expected to make it to state this year than last year, but I was excited.
What was your favorite match that you’ve been in and why?
At masters, my semifinal match to get to the finals, I wrestled the #1 ranked guy in sections and I beat him.
Who had the greatest influence/impact on your life throughout your wrestling season?
My biggest influence would be my dad because he is the reason I got into wrestling in the first place. Every day, after practice, he would motivate me and tell me it will all be worth it.
What can you say about your team overall?
This year we worked really hard and we set a common goal of winning CCC, we worked really hard to accomplish it and I’m really proud of what we did this year.