The Wonderful Women of Buhach 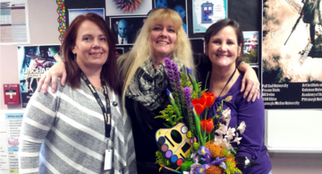 Robin Griffiths, Judy Pearce, and Linda McNeil are honored for National Women’s Month. (Photo by Kendal Bricky)
March was declared as National Women’s History month in 1987 after the National Women’s History Project petitioned congress to give Women’s History a month, instead of a week. Since 1995, Presidents such as Clinton, Bush, and Obama, have proclaimed that March was the month dedicated to Women’s History. Acknowledging women and the effect that they have had in history is good, and it allows women to understand that they have importance. In honor of this month and of the hard working women here at Buhach, three different women were chosen for the impact they have had on Buhach Colony.
​
Art and yearbook teacher Judy Pearce has shown Buhach her unique personality for the past twelve years she’s been working at Buhach Colony High School. Her creativity in the workplace shows in and outside of school; She does activities such as painting, printmaking, photography, and crafts as hobbies. When asked about who has inspired her, she states that “My parents and grandparents, because they all worked very hard and had good moral judgement. They taught me the importance of hard work and honesty.” Pearce cares about her students, and wants them to know that hard work pays off, and that you get back exactly what you put in. Her advice to young women at Buhach is “Do your research. Don't always believe negative things people say about this job, person or situation.  Do your own research and find out information for yourself and make your own judgement call.”

AVID teacher and coordinator Robin Griffiths, who has also been working at Buhach for twelve years, is another fine example of a wonderful female role model. Many people have ordinary hobbies, but Griffiths has some very unique ones, such as refinishing furniture, antique hunting, target practicing, travelling, and reading. The two people who had greatly impacted her life was her livestock judging coach and her professor at San Joaquin Delta College. She wants her students to become the best versions of themselves, and wants them to find what they are passionate about and go for it. Her advice to young women is “Don’t ever let anyone tell you that you can’t do something; It’s a lie,” she states. “To quote Napoleon Hill, ‘ Whatever the mind can conceive and believe, it can achieve’.”

English teacher Linda McNeil, who was previously a teacher at Merced High School for seven years, came to BCHS in 2001 when it first opened. Outside of school, she likes to spend time with her family, her two dogs and two cats, and she also likes to knit, crochet, and sew. Surprisingly, her biggest influence wasn’t a family member, or a former instructor, but it was her husband Ed. She says that “He’s been there to love, help, and support me through the last 38 years of my life. We are growing old together. That was our plan.” She wants her students to know that they should be honest in all things in their lives, and do the best they can in everything, and respect themselves and others. “Sometimes school isn't just about what you learn in English, math, or any other class, sometimes school is about learning how to live your life,” she says. “These lessons can't be taught, but the can be modeled; I try to demonstrate these things daily. I hope my students see that and understand the importance of them.” She wants young women to know that they should respect themselves, and to have the confidence and courage to change things that need to be changed. “Don't accept second best, ever,” McNeil states. “Don't be afraid to take charge of your life. Smile a lot and be happy, only you are responsible for your happiness.”

These women have made an impact on Buhach Colony and the students that they have had in the years that they have been here, teaching and inspiring each and every one of them. They try their best to do what needs to get done, and deserve respect and acknowledgment for all of their hard work. Although I only gave recognition to these three, I would like to also recognize the rest of the female staff here at Buhach Colony as well. You ladies are wonderful, and your work is appreciated. The students at Buhach Colony thank you very much for everything that you do!
Powered by