Uniforms: One Step Forward or One Step Back? 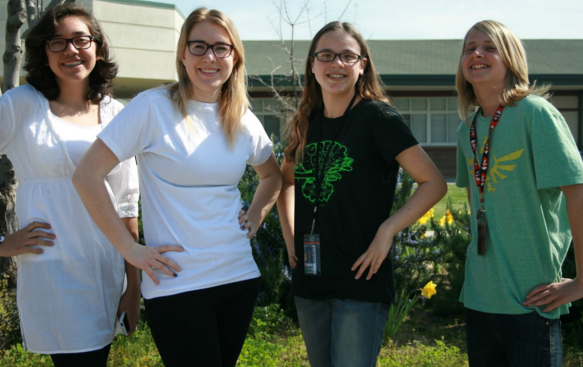 Seniors Jocelyn Godoy and Kelsey Coane pose with possible “uniforms,” next to sophomores Noah Matthews, and Andrew Locken. Photo Credit: Jenna Leon
As written about before, Buhach Colony High School is just one of the few schools that are  forced to wear ID cards. Though all students hate them, many adults thinks they are a great safety tool. Although ID cards are for our safety, is there an easier way to categorize students? Students and teachers of Buhach Colony were asked one simple question: “Would you like if Buhach was an all uniform school?” Although half agree that we should, the other half disagree.

The purpose of ID’s is to make sure that everyone at Buhach belongs there so that our safety as students is secure. Though there may be another way to make sure everyone belongs at Buhach Colony and there is one word that can sum it all up, uniforms. Senior Eddora Bustos agrees with the idea of uniforms stating, “Yes I would like uniforms because it would be easier. We would only have one outfit and we don’t have to worry about whether or not our outfit is dress code appropriate.” Having one student agree though wasn’t the end of this question. Junior Michaela Cuestas disagrees arguing that “uniforms takes away our freedom. People should be able to wear whatever they want, as long as it’s appropriate though.”

After having two people for the opposite sides, teachers were then asked what their thoughts were on Buhach becoming an all uniform school, rather than having to wear ID”s around their necks. Though ID cards seem like the easiest option, English Teacher Christina McNeil was in love with the idea of uniforms. “I think they would be a good idea because you can still have your own individual style, and then people wouldn’t be as judgemental because everyone would practically be wearing the same thing, aside from the touches they may put on.” She states, later adding, “And I know they can be expensive but as long as you're dressing in the appropriate colors I believe that you should be fine and acceptable.” Two people agreeing with the ideas of Uniforms may seem like a shocker, however ID card choosers were not that far behind in the race. Anatomy Teacher Sharon Hill disagrees stating, “I’d rather have ID’s because we already have them and with uniforms you have to go and buy all new stuff.”

Though the decision is not up to the students and teachers of the school, would Uniforms be better and perhaps easier than ID cards? Some believe that Uniforms are worse than ID cards, but as Derek Daley says, “I support whatever policy the school board decides on,” in the end realization dawns that the decision is not up to what the teachers and students want, but rather what the school board believes is the right thing.
Powered by