Why Aren't There Any Mirrors at Buhach? 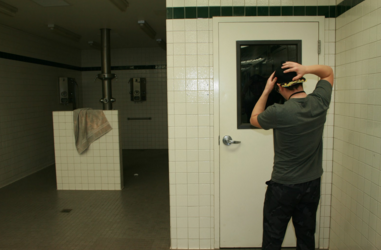 Senior Tyson Caldwell fixing his hat in the door window rather than a mirror after P.E. (Taken by Adrian Cisneros)
The bathrooms at Buhach Colony high school have maintained their perpetuous purpose of providing a nice place to take a potty break since it was first built in 2001. Alongside with the sinks and stalls provided, there still seems to be one thing missing... mirrors. Whether you’re fixing your hair or just checking yourself out, the reflection of oneself can be very satisfying throughout the day.

Students start school at 8 in the morning which is pretty early for some people. Many students feels rushed in the morning after long night of sleep which can possibly mean that they didn't finish getting
ready. Senior Ethan Kirk said “School starts kind of early, so of course there's those mornings when I can't finish getting ready. It'd be cool to stop by the bathroom and fix myself before going through the whole day.” Along with a sink and bathroom, a mirror is also a vital part of a restroom. It feels empty walking out and not  seeing your reflection.

Buhach colony has been needing quality mirrors for quite some time now. According to Mr.Callahan, leadership and english teacher at buhach, “There's hasn't been a mirror inside the bathrooms in the last 8 years that i've been here.” The price of a quality mirror is not that expensive. If the school can pay to get a mural to be redone than they can definitely pay for the installation of a few mirrors. The bathrooms aren't the same without them.

With the privilege of getting new mirrors, a responsibility from the students must also come. The mirrors are to be protected and not mistreated. We can not afford to get replacements every couple of months.  According to Mr.Kohlman, Assistant principal at Buhach, “The reason for mirrors not being replaced is because they were mistreated and broken. Odds are, it will probably happen again.” The mirrors can be placed at the top of the wall with the an angle facing down so the students can't touch them. It would allow the mirrors a longer life and less of a chance of getting mistreated. Buhach colony restrooms are in need of new mirrors! if placed correctly, they can be immune to serious damage and live a long life.
Powered by