Work Hard To Get A Card 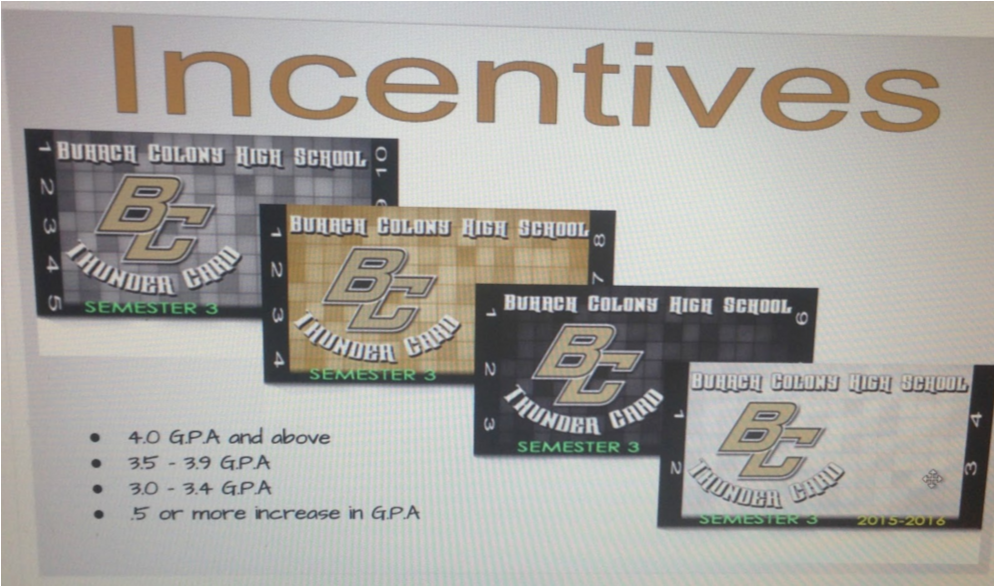 The four different color Thunder Cards that will be brought to Buhach in the fourth quarter. (Photo Credit Haley Locken.)
During the school years of 2012-2014, Buhach Colony High School had Renaissance cards. The reason behind Renaissance Cards were for students with good grades to be rewarded. Senior Alyssa Byrd stated, “I honestly didn’t care about them because even though I would get good grades, I wouldn’t get the Renissance Cards.” Students would get a Renaissance Card and were allowed to use it for a missing assignment or a no dress out in P.E. Later during the school year of 2014/15, the school got rid of them, which some would think was a good thing. “ I always forgot about them and never used them. They were kind of complicated because I could never remember when it would ‘expire’ and because it was up to the teachers to decide if they could be used for things like extra credit, I found they weren't that great,” Senior Kelsey coane says. Nonetheless, they are making a comeback. Assistant Principal Anelle Kelly is working on bring Renaissance Cards back to Buhach this year during the fourth quarter. But with a new name. They will now be called Thunder Cards and before you lose interest, just wait till you find the rewards they can give you.

These Thunder Cards will be switched for new ones every quarter. Each teacher will have a poster in their classroom showing what each number on the Thunder Card can be used for. For example, number 1 may say a no dress out day, so any student in P.E. can tell their P.E. teacher that they don’t want to dress out, the teacher will then punch a hole in that student’s Thunder Card and that student is free to not dress out, just for that day, and they will still receive the points. Each number is a one time use only and if a teacher believes you are misbehaving they can deny you the use of your Thunder Card. In order to kick the return of Thunder Cards, we will be having a rally April 7th. This is just one of the many things AP Kelly wants to bring to Buhach. This just shows that if you work hard, you will be rewarded.
Powered by